Joseph Dunn (1872 —1951) was professor of Irish Languages of Literature at the Catholic University of America in Washington DC until 1931. Dunn graduated with a Bachelor of Arts from Yale University in 1895 and as a Doctor of Philosophy from the same institution in 1898. He joined the Catholic University in 1899 as an Instructor in Latin in the Department of Comparitive Philology and Sanskrit, transferring to the Department of Keltic [sic] Languages and Literature. In 1932 he was elected a Fellow of the American Association for the Advancement of Science. After his retirement he continued to lecture at Yale and City University NY. Dunn died on 9 April 1951 at the age of 79, and orbituaries were published the next day in the Washington Post and New York Times. 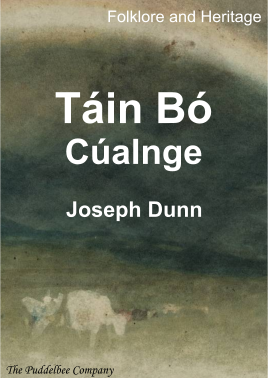 Táin Bó Cúalnge (modern spelling Cúailnge), is arguably in the words of Dunn himself, “the Iliad of Ireland, as it has been called, the queen of Irish epic tales, and the wildest and most fascinating saga tale, not only of the entire Celtic world, but even of all western Europe.” It is the main story in the Ulster Cycle, describing the life and adventures of the mythical hero Cu Chulain — the Hound of Ulster — and concerns a raid against Ulster by Queen Medb of Connacht, supposedly in the first century of the modern era. The object of the raid was the acquisition of the Brown Bull of Cúailnge (and the accompanying herd) by Medb to match the Whitehorned Bull of her consort King Ailill.

This edition of The Ancient Irish Epic, Táin Bó Cúalnge is adapted from the 1914 edition, published by David Nutt, London which is in the public domain. Unlike the original, it is not intended as, and should not be treated as, an academic text. This edition does not include Dunn’s margin notes or, except in the Authors’s preface, footnotes or bibliography. Where appropriate the English spelling has been modernised (British English). For ease of reading, minor changes (which do not affect the flow of the text) have been made to update the grammar.

To the best of my knowledge all rights to the content of works published in the Forgotten Classics edition of Táin Bó Cúalnge, including illustrations, resides in the public domain in all territories. Ownership to the particular layout and design of a specific publication is claimed by the publisher. Fair use, including non-commercial distribution and reproduction of the publication in electronic and printed form, is allowed with attribution to “The Puddelbee Company” as the source.