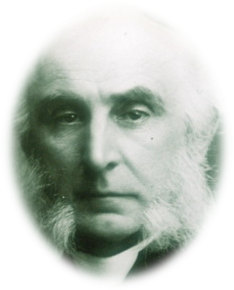 Although, like the other historical fiction of Arthur Conan Doyle, The White Company is largely unknown to modern readers, at the time it was one of his most popular novels. Indeed, it was so popular that fourteen years later, the author published a prequel, Sir Nigel, detailing the early life and rise to prominence of one of the main characters. According to some commentators, Sir Nigel Loring is loosely based on two historical figures: Sir Neil Loring, a founding member of the Order of the Garter; and Sir John Hawkwood, the 14th century leader of the historical White Company, which was active in Italy. In the novel, the company is involved in the military campaign of Edward, the Black Prince in Spain, prior to the battle of Nájera during the first Castillian Civil War. However, at several points in the story, Hawkwood’s activities as condottiero of the main company in Italy are referred to. Most notably, this occurs during the discussion among the company whether to join the army of the prince, or to maintain their profitable lifestyle as reivers in the French border territories. Sir Neil also appears briefly, as a second cousin to Sir Nigel, leading his own troops in Edward’s army.

Unlike the historical figures, the fictional Sir Nigel had a decidedly romantic concept of chivalry and honour, even to the extent of inviting challenges from other knights in the hope of causing or receiving an injury. It was, however, never his intention to kill except on the field of battle, and never to cause unwarranted injury to people lower in station than himself. From the narrative alone, it is unclear to the reader whether the author himself holds such manners in disapproval or in approbation. The character and actions of Sir Nigel are written sympathetically, but at times are exaggerated to the point of comedy, even in the fictional eyes of his companions in the adventure. One such example is his wearing of an eyepatch, in honour of his lady wife, until he had committed a great feat of valour. The dialogue has many examples where other characters remark to Sir Nigel that the binding up of one eye is an honourable old-fashioned tradition, but none actually wear a patch. Nevertheless, Conan Doyle makes it explicitly clear that Sir Nigel had survived so long, not because of his romantic ideals, honour and valour, but through his undoubted skill and proficiency in the martial arts. Similarly, the respect of his peers, companions and subordinates also accrued from his tactical knowledge and experience as a military commander, and not through any aspect of his personality.

The other main protagonist is Alleyne Edricson, a young man with a sheltered monastic upbringing, who serves as a witness connecting the different strands of the narrative. With few exceptions, all involving conversations of Sir Nigel, any occurrence in which he was not directly involved was related in the presence of Edricson by another character. Often, this narrator is one of the other two principal characters: Samkin Ayleward, a veteran archer of ambivalent morals and great loyalty, who serves as mentor to his companions; and John Hordle, a redheaded giant in the mould of Little John who has a strong sense of justice but is not above a little petty larceny. The novel opens on the day on which Alleyne and John leave the Cistercian monastery of Beaulieu Abbey; one because he had come of age, and the other because he was expelled. 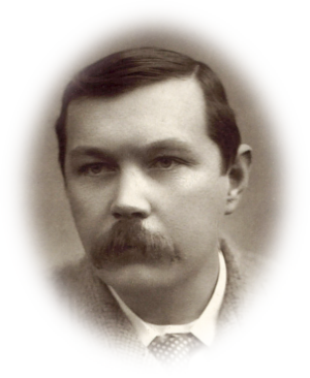 Arthur Conan Doyle (1859 – 1930) is best known for his fictional detective Sherlock Holmes. However, in profession and character he was more akin to that of Dr John Watson, especially as portrayed by Nigel Bruce in the early films. He was a well-meaning and intelligent, but credulous, medical doctor with a keen interest in sports and a belief in the supernatural. He played both amateur football for Portsmouth and first class cricket for the M.C.C. On 23rd August 1900 he took the wicket of the legendary W. G. Grace.

Doyle was born on 22nd May 1859 in Edinburgh, and returned there in 1876 to study medicine after attending Jesuit schools at Stonyhurst and Feldkirch. While studying he wrote fiction and experimented on himself with plant poisons from the Royal Botanic Garden. His results were published in a letter to the British medical Journal on 20th September 1879. His first short story, The Mystery of Sasassa Valley, was published two weeks earlier in Chambers’s Edinburgh Journal.

After completing his studies, he served as ship’s surgeon on the Hope, a Greenland whaler built in 1872, sailing out of Peterhead, under Captain John Gray Junior. His account of the seven months in the Arctic was published in January 1897 in the Strand Magazine. After graduating, in October 1881 he once again signed on as ship’s surgeon — this time on the SS Mayumba bound for West Africa. In June 1882, on returning to England, he set up practice in Southsea, and resumed writing to supplement his income.