Arthur Conan Doyle (1859 – 1930) is best known for his fictional detective Sherlock Holmes. However, in profession and character he was more akin to that of Dr John Watson, especially as portrayed by Nigel Bruce in the early films. He was a well-meaning and intelligent, but credulous, medical doctor with a keen interest in sports and a belief in the supernatural. He played both amateur football for Portsmouth and first class cricket for the M.C.C. On 23rd August 1900 he took the wicket of the legendary W. G. Grace.

Doyle was born on 22nd May 1859 in Edinburgh, and returned there in 1876 to study medicine after attending Jesuit schools at Stonyhurst and Feldkirch. While studying he wrote fiction and experimented on himself with plant poisons from the Royal Botanic Garden. His results were published in a letter to the British medical Journal on 20th September 1879. His first short story, “The Mystery of Sasassa Valley”, was published two weeks earlier in Chambers’s Edinburgh Journal.

After completing his studies, he served as ship’s surgeon on the Hope, a Greenland whaler built in 1872, sailing out of Peterhead, under Captain John Gray Junior. His account of the seven months in the Arctic was published in January 1897 in the Strand Magazine. After graduating, in October 1881 he once again signed on as ship’s surgeon — this time on the SS Mayumba bound for West Africa. In June 1882, on returning to England, he set up practice in Southsea, and resumed writing to supplement his income. 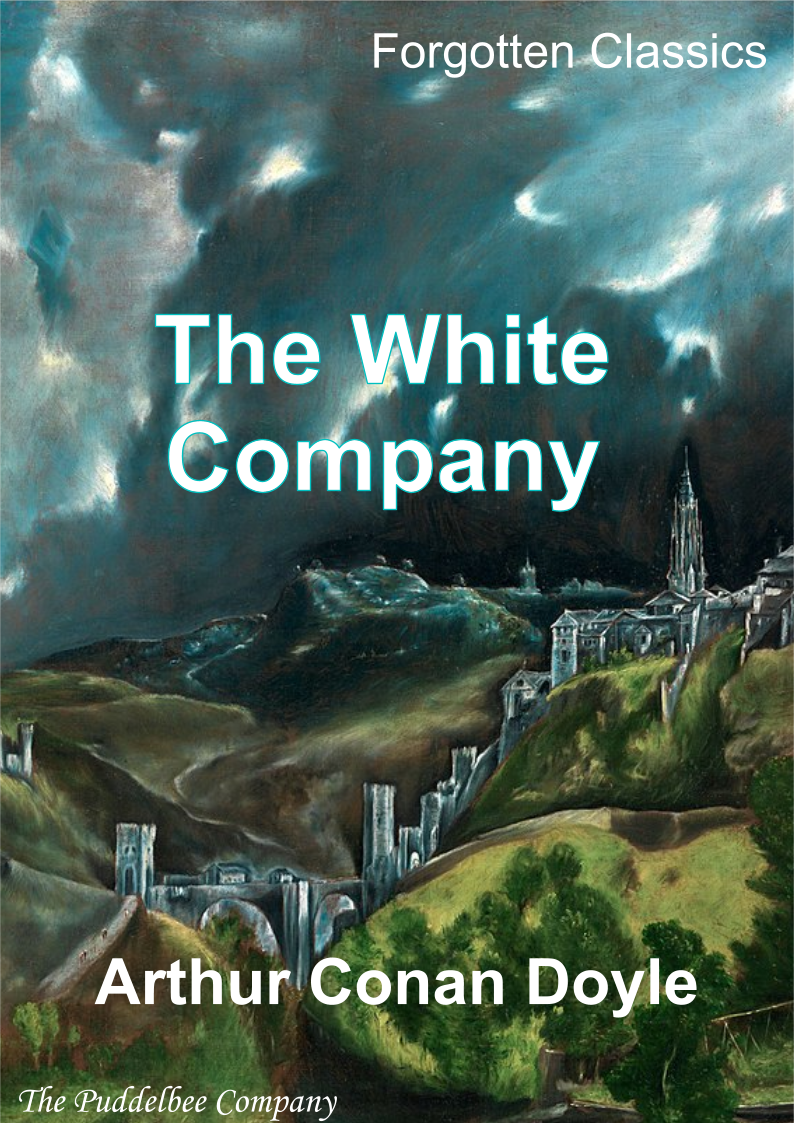 Although, like the other historical fiction of Arthur Conan Doyle, The White Company is largely unknown to modern readers, at the time it was one of his most popular novels. Indeed, it was so popular that fourteen years later, the author published a prequel, Sir Nigel, detailing the early life and rise to prominence of one of the main characters. This character was loosely based on two historical characters: Sir Neil Loring, a founding member of the Order of the Garter; and Sir John Hawkwood, the 14th century leader of the historical White Company, which was active in Italy. In the novel, the company is involved in the military campaign of Edward, the Black Prince in Spain, prior to the battle of Nájera during the first Castillian Civil War. The other main protagonist is Alleyne Edricson, a young man with a sheltered monastic upbringing. He joins the company as squire to Sir Nigel and tutor to his daughter Maude, with whom he forms a romantic attachment.

This edition of The White Company is adapted from various editions, up to the 30th edition of 1909. It is not intended as, and should not be treated as, an academic text. The deliberately old-fashioned style adopted by Conan Doyle has not been updated, but where appropriate the spelling has been modernised (British English)

To the best of my knowledge all rights to the content of works published in the Forgotten Classics edition of The White Company, including illustrations, resides in the public domain in all territories. Ownership to the particular layout and design of a specific publication is claimed by the publisher. Fair use, including non-commercial distribution and reproduction of the publication in electronic and printed form, is allowed with attribution to “The Puddelbee Company” as the source.